That’s like, almost half the bloody year gone already!
What?

But, the good thing?
I’ve been hanging out for June to get here
And not for the obvious reasons….like it’s finally summertime here in Chicago
And I get to wear a bikini
Fuck no, not that. Ever.

June means….it’s time for me to head back to Australia and play some solo shows
A whole show….which means I can do a tonne of new stuff, shitloads of old stuff
And that, makes me happy – and hopefully it gives you guys a little woody too
Not that you have to show me
No really, I don’t want to see that
This will be my first run of the F.O.C.U.S. shows, with lots more being added this year and next
Huzzah to that!

Also, Macaroni and Magoo will be on school holidays so I’m bringin’ the little’ns with me
That, makes me REALLY happy
And not just because now I will KNOW the people sitting either side of me for the long flight over, and won’t be squashed between a smelly giant who takes up half my seat, and someone with a crying baby or a gastro problem or, you get the idea
OK, mainly that
The girls are the best fun to travel with, and I’m looking forward to them replacing, “How many more sleeps ’til Australia and Nanna and Poppy and our cousins and the beach and Cherry Ripes…with, ‘Are we there yet?’
Which, once we’re there, will be replaced by, “When are you going to work so we can stay with Nanna and Poppy by ourselves and have ice cream for breakfast and learn some new words?”

But first, I need your help
Do you live in, near, or next to any of the places on this first lot of shows I’m playing?
Specifically, NORTHAM, COWARAMUP, GERALDTON, BOMADERRY, DARIWN (Humpty Doo), GROOTE EYLANDT and GOVE?
If you do, and would like to help out by putting some posters up in your area, advertising the show, then I don’t care what anyone says about you, you’re alright!

Send an email to admin@jennytalia.com with the subject ‘POSTERS’
We’ll pick a couple of peeps for each town, get some posters out to you A.S.A.P to stick up everywhere
And to say thank you, you’ll get two tickets to the show, as well as a signed copy of the new album, F.O.C.U.S.

Whaddya reckon?
If you’re interested, we’d love to hear from you!
Have family or a mate that lives in a town I’m headed to?
Let them know!! 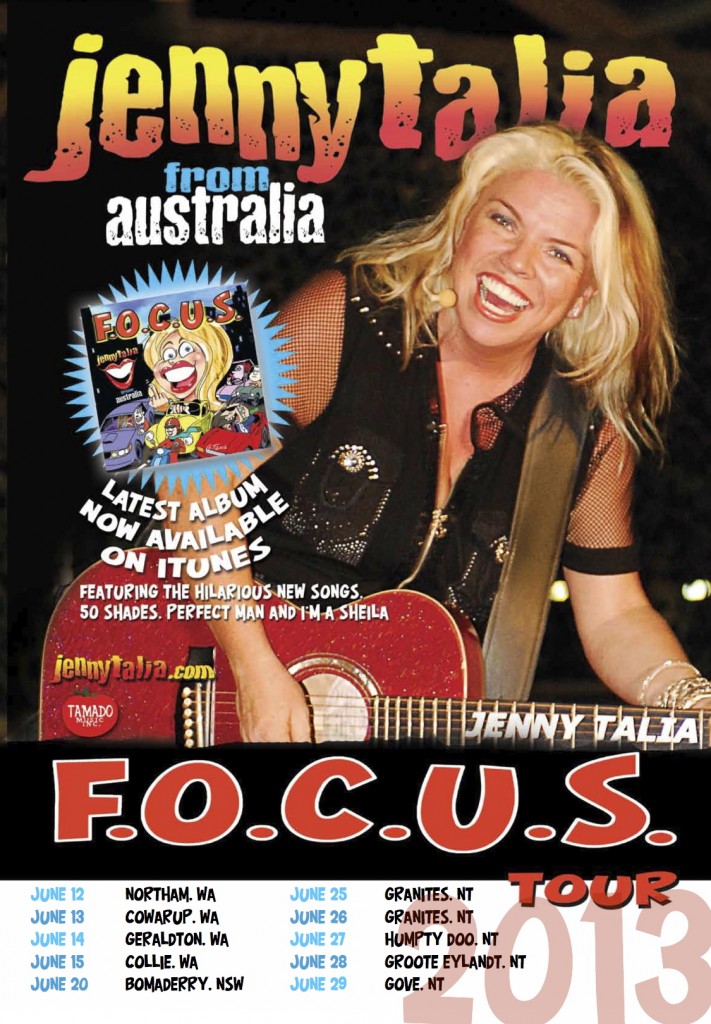 Looking forward to hearing from you
Thanks in advance!