How was your Mother’s Day ladeez?
Even though I was in the same country as my Mum, we didn’t spend it together…boo. (she’s still in New Orleans) But I’m thinking Mum had a good day anyway. She received a totally gorgeous (yes, I picked it out) Pandora bracelet.  It’s her second one. I won’t go into what happened to the first one, but rest assured, THIS ONE came with a safety chain.

I had to say goodbye to an old friend on Mother’s Day. We’ve been close for more than 9 years, and have had many an adventure together.
My car.
She’s been dying a slow death for a while now. Last time we decided to replace her and get me a new car,  we came home with a truck for Diamond. ???? A green truck. That I have been driving for the last year or so. I call it the Green Hornet and I like to pretend the outside is white, or grey, when I’m inside it. When I get out, I just shut my eyes. It’s an awesome ride and I love driving it. But that doesn’t make it any LESS green.
Anyhoo, it was time to say sayonara to my old buddy. I know, it’s just a car. But both my babies  came home from the hospital in it….blah blah…I know I’m a dickhead. If I could fix her I would. But it would cost more than she’s worth. 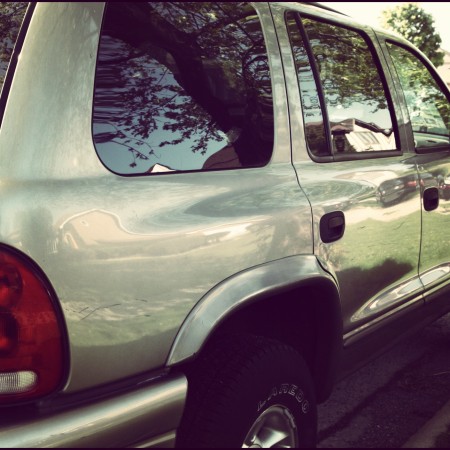 So last weekend, Diamond and I headed off to do our second most favorite thing in the world. Our first is stubbing our toes on the corner of the bed.  Followed closely by car shopping. Fucking hate it. And with respect to all you car salesmen out there, you are a bunch of knob-jockeys.

But it turned out OK. I just sat in the kids playroom of the car dealership with the girls, playing Barbie dress up on the iPad. I like to pick and choose when I have to be a grown up. So I left Diamond to be the dick. You know, the one that haggles with the “trust me, I’ll give you the best deal” guys, and all that other fun stuff.
He came out after an hour, handed me the keys, and said Happy Mother’s Day! I said, a car? That’s what I get for Mother’s Day? I’m like, DUDE, you will do anything to avoid going to the mall.
All shit-stirring aside. I couldn’t be happier. I love it!
Please ignore all previous references to stupid little blonde women who drive around the suburbs in big-mofo-yank-tanks. ‘Cause now I am one!
Magoo calls it my ‘President’s car’. Probably because it’s long and black.
Like the one the President rides in (not what YOU were thinking you sick bastards)
Does it make my bum look big?
Nope, I look like an ant getting out of the fucker. It’s ginormous!
Diamond thinks I’m a fruit loop. Possibly because on Mother’s Day night, we were on the couch, holding hands, watching the kids play outside. I leaned over and said, “I love…..
MY CAR!”
He might have been expecting, I love my family or YOU, or something along those lines.
Whatevs. I do love all of them
But I really love my car
Let’s not tell him about the speeding ticket that I  narrowly avoided when I drove it home from the dealership 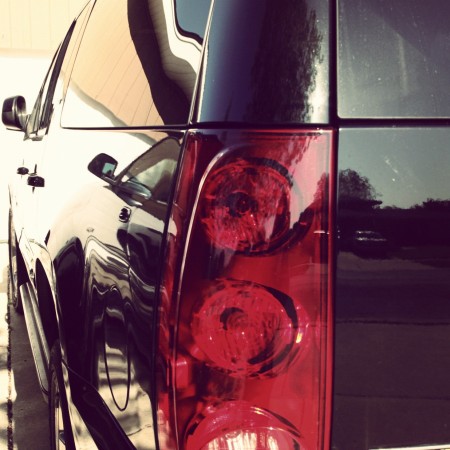 At least the accelerator works.