Being home in December is the besets of the best

I get do all the Christmas fun stuff with the girls

Each time, I have been dressed head to toe, in varying versions of green & red

Always with a different flashing hat

It costs a lot of money to look this cheap

Now, me and baking aren’t really mates – so I was hesitant, and wasn’t looking forward to it, but figured it couldn’t be any worse than waxing my own bikini line

All the Mums were gathered in the cafeteria, and the kids came in from the classrooms in groups of 4.

I, not wanting to fuck it up, asked what I should do first

Then a Mum, that obviously hasn’t been laid since January, told me, “washing your hands might be a nice start”

Oh, so THAT’S how we roll at these happy kid-friendly Christmas fun days? Full on bitch mode. Got it.

So I washed my hands, and then pulled up a chair over by the oven. I’d decided to be the boss of ‘timing’ the cookies. I just sat there, counting down backwards from seven minutes, loudly – for every batch that sour mutt bought to me

Then I saw HER son, picking his nose, then sticking his hands all over the gingerbread dough. He saw me watching him, and kind of shat himself for an instant. ‘Til I gave him a thumbs up and my best, yeah I’d totally wipe boogers in my food if she was my Mum too dude – look

But I think she might have snuck off to pop some happy pills, cause she actually HUGGED me when I left and THANKED ME for coming to help – like she had no idea that she’s been PMS-ing all in my face for the last hour. Skitzo much?

She should thank Diamond, because I promised him I wouldn’t try to kill random strangers that pissed me anymore. At least not before Christmas anyway.

Which was totally awesome

The parents were all super nice and friendly 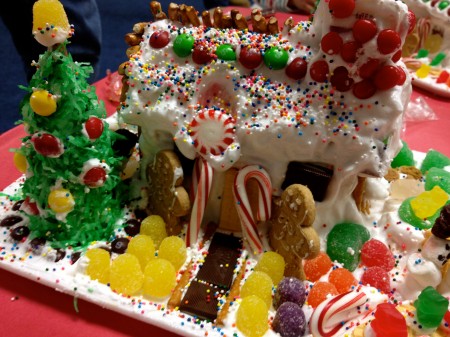 And my new WINE BRA.