Whatever you call it, 11-11-11 is a great day to remember those who have served for your country

The kids sang patriotic songs, waved flags, read essays they’d written about what a veteran means to them

And whether they knew it or not, were learning to respect the people that have, and continue sacrifice for their freedoms

Diamond’s Dad, who served in Vietnam, came with us. He doesn’t say much about his time there, but I could see the pride on his face as he watched his granddaughters and all their little friends show their pride for their country and it’s veterans

The girls, in turn, were beyond chuffed to have their very own veteran to honour

So many kids at the school have family members currently serving overseas. I got more than teared up seeing those kids, wearing hats from their family member’s branch of the military, proudly march through the gym carrying flags 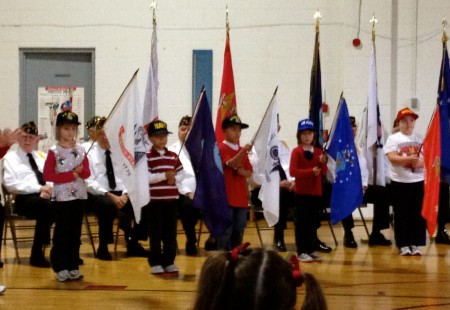 They even had a bagpiper play Amazing Grace. And that was the end of me

Magoo got to say the pledge of Allegiance, which she nailed. If you don’t count that it sounded more like the Pwedge of Awegiance 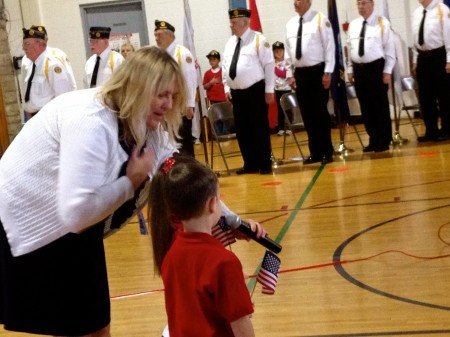 But my favourite part, was actually one of the veterans who assisted in the flag folding. After explaining to the kids about the significance of the flag & how it’s folded (read about it here)

He told everyone that he was at the Lincoln National Cemetery yesterday, and he folded a flag to present to a family of fallen soldier.

He presented 11 flags, at 11 soldier’s funerals yesterday. You could feel his sadness as he told the room this

Then, as the kids walked back to their classrooms, they thanked the veterans and exchanged high fives. These children may not totally ‘get it’ yet. But thanks to days like this, they will. And they should

It was beautiful to see that same sad veteran, end his morning with a big grin on his face 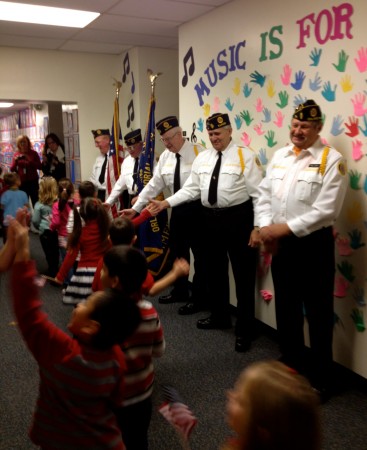