We have great neighbours who don’t complain. But seriously, the Fluffinator’s barking is ridonkulous

I yell at him. Diamond yells at him. Macaroni’s even started yelling at him

Then Magoo yells at all of us, for yelling at him

It’s just something that Great Pyrenees dogs do. We knew that when we got him. Especially at sunrise and sunset. Words cannot explain just how NOT fucking awesome it is, to have a 130 pound fur ball of booming bark-ness be your alarm clock. Before the FUCKING sun. Every FUCKING day.

We thought we could train it out of him. God how we’ve tried. And failed.

The older he gets – he just turned 3 – the more he’s barking. It’s like he’s so big now, he looks at us like, “what cha gonna do about it?” (I always imagine Fluff having the canine equivalent of a Tony Soprano accent)

And it’s driving us fucking mental

So today, I give you, the face of a dog that has just been fitted for his first bark collar

(he’s wearing it, but you just can’t see it under all that FUR) 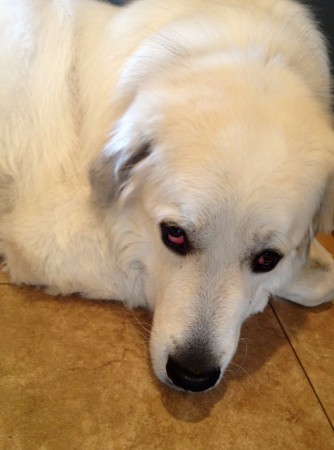 Is it not THE best sulky face you’ve ever seen?

He’s not mad. He’s just got himself a big ol’ case of PMS right now

He has the deepest, loudest bark on our street

Fluffy was, until today, boss-cocky of the big bark club

Can dogs have an identity crisis? 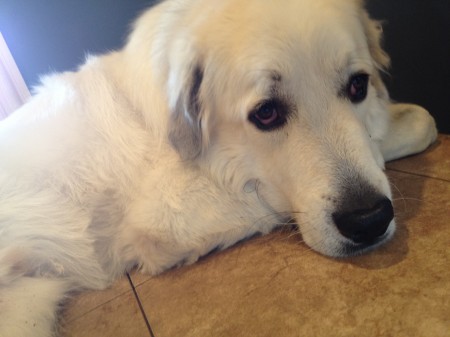 In an effort to try and cheer him up, Magoo stuck a bow on him 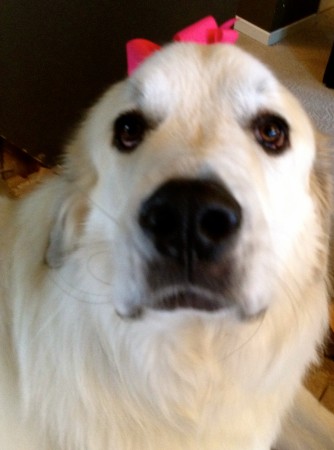 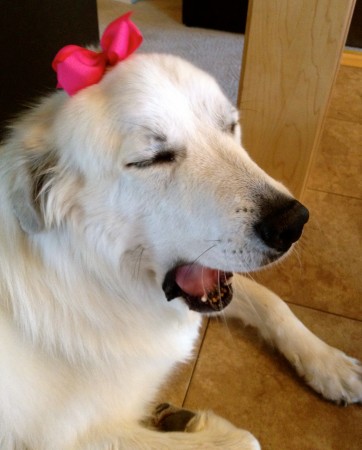