Ash cloud from the eruption of the Mt Puyehue Cordon Caulle volcano in Chile has been causing chaos in New Zealand skies for the past two weeks and continues to ground flights.

Air New Zealand passengers are the only people taking to the skies today with Qantas, Jetstar and Pacific Blue cancelling all services to and from New Zealand.

Now, I’m all about safety

We knew last night before the show that our flights home today, with Qantas had been cancelled

To be honest, we’d been following the news all week

So we were kind of prepared for it

And from a safety point of view, I didn’t WANT to fly, if the people that know their shit over at Qantas, didn’t deem it to be safe

The lady on the phone said that while she couldn’t give me an accurate answer, understandably

She could tell me that the first flight with seats available back to the U.S would be July 4th

I was like, hang on – so even if your flights are up and running TOMORROW, you can’t get me on a flight until July 4th?

She said, yes – all the flights are full

Well that’s all well and good lady…but WHAT THE FUCK AM I SUPPOSED TO DO FOR TEN FUCKING DAYS IN THE MEANTIME?

She said, Well we’re happy to reimburse you for accommodation and one meal per day

I said, will you also be happy to call my two daughters and tell them, hey kids – you know how you thought Mummy was coming home tomorrow? Well she’s not, OK…ha ha…joke’s on you!

And then deal with the consequences of that?

I tried to reason with the woman, who I appreciate was only trying to do her job

And the other one is a bitch

(It was nice to NOT be the bitch for a change!)

The conversation ended with her having enough of my hysterics, “do you want to rebook your flight for July 4th or am I terminating this call?”

So  a week ago, when I checked out Air New Zealand’s one way fare prices to Chicago – just to see what my travel options were if Qantas was still canceling flights

I saw how  crazy, expensive they were

My jaw hit the ground and I though, well THAT won’t be happening

I felt sick just thinking about it

And I understand that some of you are probably thinking, well, you’ve been away this long – what’s another week or so?

And long to be home, and be Diamond’d wife

And Mummy to Macoroni and Magoo

But after getting off the phone to the Qantas lady

I was straight on the phone to Air New Zealand

Booking myself the LAST SEAT AVAILABLE

On that  crazy, expensive one way flight to Chicago 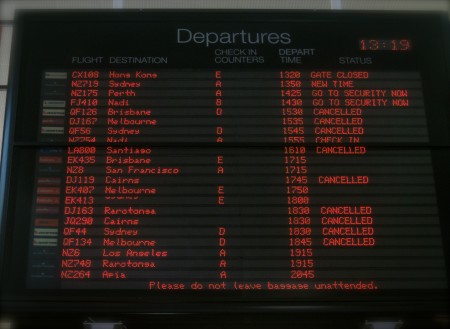 And when I got to the airport today

My heart broke a little

When I saw all the cancelled flights

All the stranded passengers that don’t have any options

They’re sleeping at the airport with their families, in the hopes that somehow they can get to where they’re supposed to be 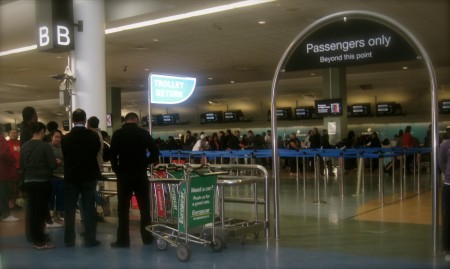 As I sit here, getting ready to board my flight

I am feeling nothing but grateful

You can send your “I told you so’s” to me in heaven, no make that hell

PS – Mum & Dad have opted to ‘wait it out’ for now in NZ to see what happens. The idea of no work and a cosy hotel room with just the two of them, for whatever reason, appeals to them