No, not THAT big O

So let’s start this one at, well, hmmm, oh what the hell

Let’s start at the beginning for a change hey?

Warning – this is going to be a long one. Not a few paragraphs long either. I’m talking pack a lunch-get a babysitter-prepare for butt sores, long

I’ve lived in Chicago for more than 8 years now

And in that time, I can’t even begin to tell you how many people are always asking

Isn’t that where Oprah lives?

Where she films her show?

Have you met her?

Can you get tickets to the show?

So, I’ve kind of gotten used to telling people to bite me it over the years

I’ve always wanted to go to the show

But tickets were as hard to find as rocking horse shit

Every time someone (ie; my mum or best mate) came over from Australia

It was always, can you get tickets this time??

And the answer was always the same

fuck off No can do, sorry

So imagine the freaky-happy-dance I did last Thursday

When my girlfriend Ruby called

Note, Ruby is not her real name. She said if I mentioned her in the blog, she wanted a kick arse, cool alias name like Diamond has. She couldn’t come up with one – so she gets a stripper name – OK Rubester??

Anyhoo, Ruby is a huge fan of the country group LADY ANTEBELLUM

And she’d been on the band’s website, which was advertising their upcoming appearance on the Oprah show 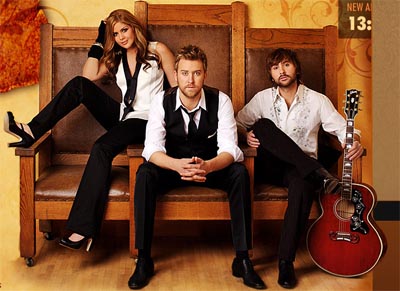 If you were fan, you could click the link and enter your name, and go into a raffle type thing to win ticks. I say ‘raffle type thing’ ’cause Ruby insists she didn’t WIN the tickets – she earnt them. OK Rubes?

So Ruby entered, and last Thursday she got the call

Now this is where it’s finally cool to be country

After years of getting a lot of shit grief for being a country music fan and, shock horror, a country singer, it finally wasn’t an embarrassment turned into a GOOD thing

Ruby decided that because I was a fellow country music fan, she would take ME with her to the Oprah show

I was finally going to the OPRAH-BLOODY-WINFREY show bitches!!

After much squealing by me and covering of ears by Diamond, it suddenly hit me

What the fuck was I going to wear?

Off to the mall

6 shopping bags and many melted credit cards later, I headed back home to make my decision

I was determined to think outside the wardrobe this time

I was going to shake things up for the O SHOW!

Gonna change it up, I was

Change is for pussies anyway

Go with what you know, I say

So the big day comes

Ruby was picking me up before 6am

So of course, my own never to be trusted body clock had me up at the fucking ridiculous time of 2am

Which would have been ok, had I not been up until midnight the night before watching the Olympics

(Torah Bright one gold for Australia in the Woman’s half pipe by the way – hoooorah!)

So there I was, at the Starbuck’s drive thru at 5:30am (when it opened) getting in a quick fix before Ruby came to get me

And my red, leopard print dress and full face of make up at that hour of the morning, totally confirmed for the Starbuck’s staff, that I am indeed, a lady of the night

Back home in time for the Rubester’s pick up

And we were off

They tell you to be there by 7:30am at the latest

We arrived at 6:50am – good start right there peeps

Parked across the road, and went to the Oprah building (she has several on the block) and got in line 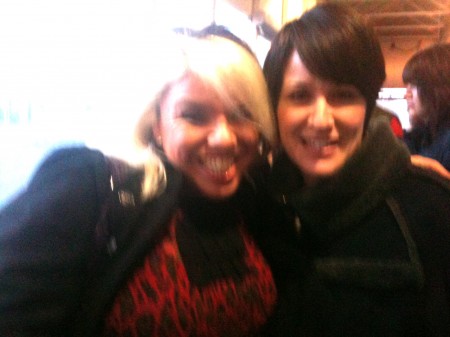 Note to self: when the lady says, isn’t this a cute makeup case? as she holds your iPhone, she’s probably not going to be a stellar photo taker

They started letting us in straight away, checked our ID and the process began

Which was thorough I have to say

Airport security could take a few tips from the Oprah staff, let me tell you

Within 10 minutes, they’d checked my ID, gone through my purse, taken my bra off patted me down and confiscated my phone & camera

Oh yeah, that’s right – me, whose camera is attached like a hairy mole AT ALL TIMES to my person

Was going into the Oprah show with NO FUCKING CAMERA

Alone, I could have driven everyone crazy with the constant click clicking, flash flashing & oh fuck my battery’s flat-ing, noises

Imagine if there were a couple hundred people doing the same?

And no bar what the fuck Oprah?

We waited in a room with everyone for a while, which I enjoyed more than words can describe

Then they call our names and take us, group by group into the studio where the show is filmed

They seemed to seat us by colour

Meaning, they were trying to spread the colours around the room. Not too much black clothing together – bright colours scattered around evenly etc

And it almost did

Ruby and I were initially seated in the right hand corner, at the back of the room

Further up the front

Until we were, holy mother of God, at the FRONT

It should be noted that at this point, I got the giggles

Which is not uncommon for me to do in times of high stress, anxiety or fear

Calling 000 (australia’s version of 911) years ago, when our house was being broken into – but not being believed by the fucktard operator – because I was dunk giggling too much to give her my address properly. Thankfully our rollershutter’s on the windows came down in time to make the little fuckers bastards panic and run off – but not before falling in the pool

But I digress how unusual

We sit in our fancy front row seats for a while, checking our watches – ’cause Friday’s shows are always live

And it’s nearly 9am – startin’ time

And this dude with a microphone casually walks up onto the stage & says, in a voice totally devoid of any emotion or enthusiasm, ladies & gentlemen – Oprah Winfrey

He said it so flaty, it took everyone half a second to realise what he’d said

But then we saw her walking out 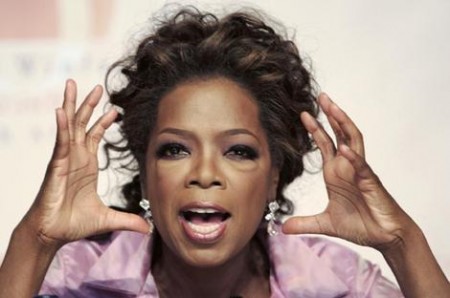 In the fucking flesh

And when I saw her, right in front of me, in the flesh –  my first thought was

Jeeeeesus, her head is HUUUUGE!

And she had no shoes on

And oh Oprah, girl, you have got yourself some butt ugly feet

Surely, in billionare-land, there is a store where you could by some new ones. Or at least get a stunt double?

Or I dunno, maybe wear some fucking SHOES!

I take that back kinda

She’s got some lacky to put SHOES on her FEEEEEET

Fucking A I say!

Told you it was going to be a long one

Matt Lauer via satellite from the Olympics yawn

And a surprise guest

Then he tell Oprah that he has something for her. Something that no one can get there hands on

And Oprah says, you mean like these ones? – and holds up a pair that she already has

Suck on THAT Matty L

And I’m thinking, of course she does

So, now Ruby and I have our OWN red gloves that no one else has

And you can’t get then anywhere

Except for the 200 pairs for sale on Ebay

But other than that, these mittens are like, EXTINCT for fuck’s sake

The segments over and they go to break

Which I plan on buying a packet of, at the Oprah store after the show

And audience members are asking her questions, and yelling out I LOVE YOU

I mean, they’re finally in a room with Her- Oprahness and they’re coming out with the dumbest stuff

And she looked at me and said, thanks

But I know the whole times she was thinking, fuck off honky I ain’t giving them to you wow, make sure you don’t put the camera on that chick there, her hotness might melt the lense

Back to the show and the surprise guest

After the ad break, they start showing footage of the olympic snowboarding

Then they put a snowboard out on stage

Then SHAUN WHITE walks out

And I’ve got to say, when he walked up on stage I thought, this guy has the body of a 12 year old half of the women in that room went, DOLLOP 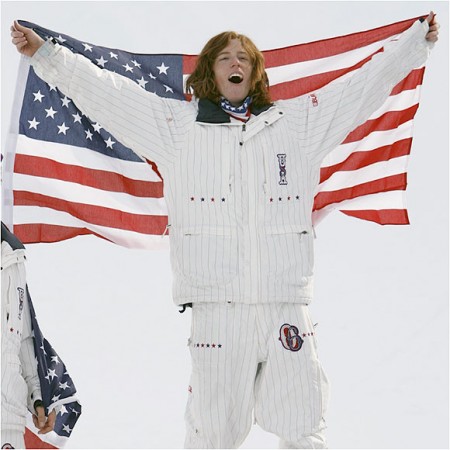 I’m not sure what the attraction is to be honest

He is a ranga afterall

But, I gotta say, a totally cool guy

As apposed to up his arse

And after his segment, they sat him in the front row

And for the girl who had to give up her seat for him and go sit up the back?

Sucks to be you lady!

So, now ginger nuts Shaun White is sitting right next to us

But she settled for the Gold

And her excitement is a reminder to us all, ladies

We all got to touch it 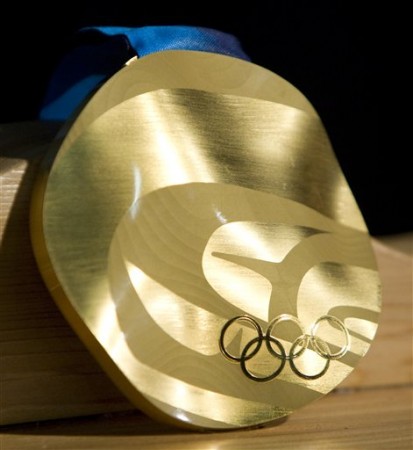 It was big & heavy

But, like I said, once we were inside – I got nothing for you

So, in the interest of leaving no detail to the imagination

I give you my interpretation

Straight from preschool art class my memory bank to you 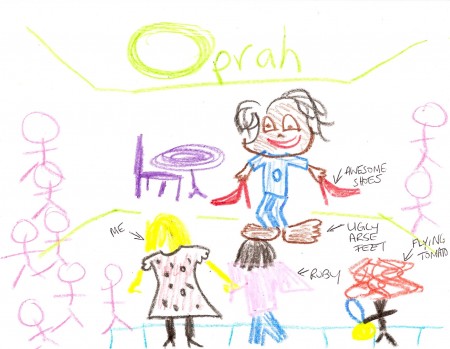 That’s not quite the end

Once I got my camera back

I took some pics outside 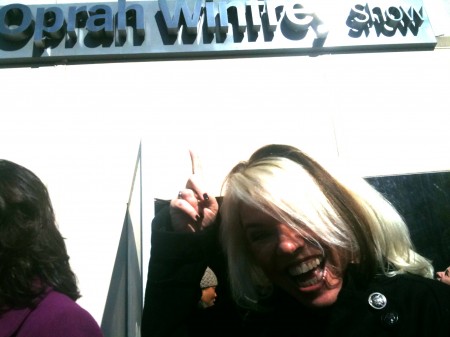 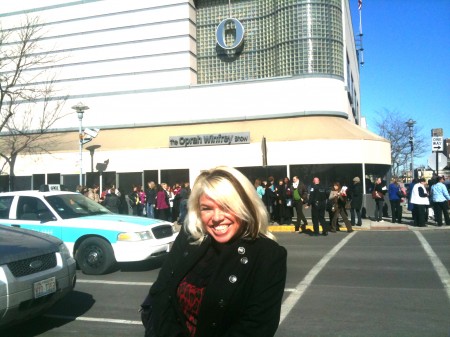 And in the car on the way home 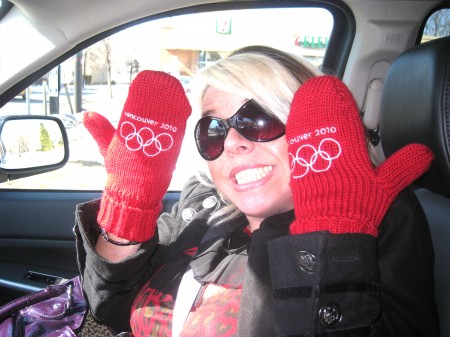 Which won’t be for a while

So go for a walk or something