How was your Halloween?

I know everyone doesn’t celebrate it

It’s not really a huge deal in Australia

It’s getting bigger every year in the UK

And as always, it was widely celebrated here in the U.S

Especially at our house

The kids love it

So we go all out

We decorate the house

We go to Halloween parties

And of course, we trick or treat

Having Halloween fall on a Saturday this year was great

The kids had all their parties at school during the week

Then come the weekend, we got to do the best part

get free candy Trick or Treat!

We even dressed Fluffy up

Not a complete costume mind you. Most Halloween costumes only come in small, medium and large. If you’re lucky, you might find the odd costume in extra large – but they don’t make them in ‘horse’ 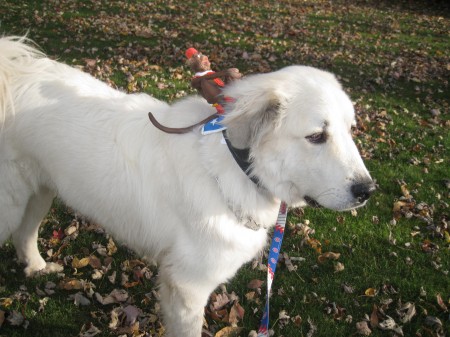 And didn’t that thing drive him nuts? 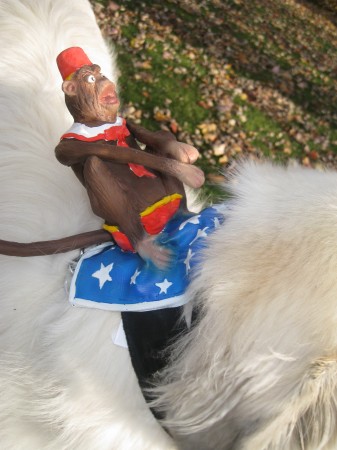 So he ate it

Of course he did

We headed off around 4pm in our neighbourhood, with the wagon in tow. Past Halloweens have proven that the girls little candy bags fill up faster than I can eat really quickly, so we empty them out into the wagon as we go 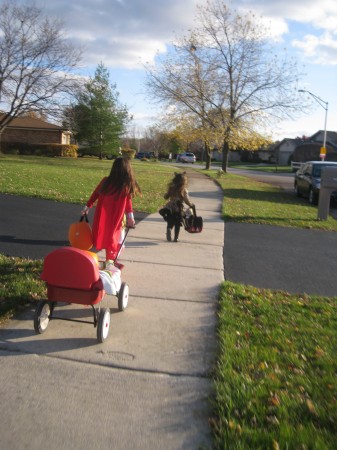 And the girls this year?

We have Wonder Woman, and Super Cat 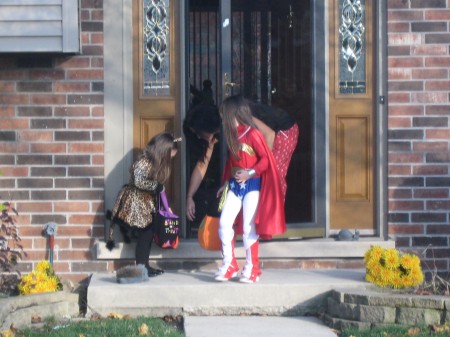 Miss 6 Wonder Woman decided that Diamond should be Captain America, so they could fight crime together

Miss 4 Wonder Cat decided that I should be Cleopatra, so….ummmm…well… who knows why? That kid is always coming up with weird shit 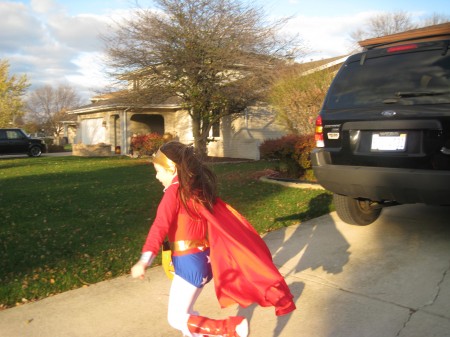 So off we went, Wonder Woman, Captain America, Wonder Cat (who by the way, was just a regular cat until she heard her sister was WONDER Woman) Cleopatra, and Fluffy, the pissed off elephant dog, with the monkey on his back 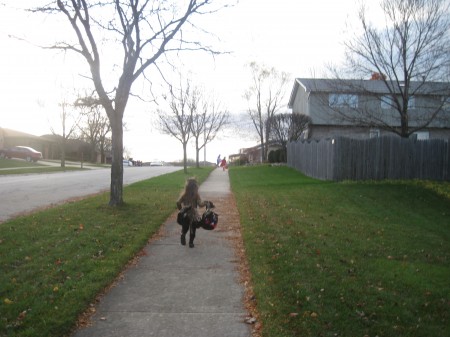 About 2 hours into it, we were looking pretty good. I mean good in the ‘candy’ way. And possibly good in the ‘looks’ way, if you count all the people that stopped to take our photo

OK, so they were really only taking Diamond’s Captain America’s photo. I think that had something to do with him flashing his shield and yelling, “Captain America. here to save the DAAAAAAAAAAAAY!” at everyone that drove by. 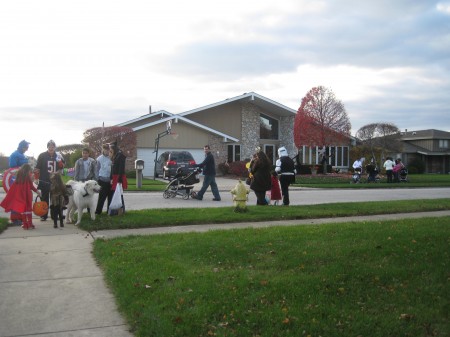 We were in a great mood

I think the traveling bar helps

We used to just travel with an esky (cooler) but apparently that’s illegal blah, blah, blah

Now we have a box, filled with ice and beer 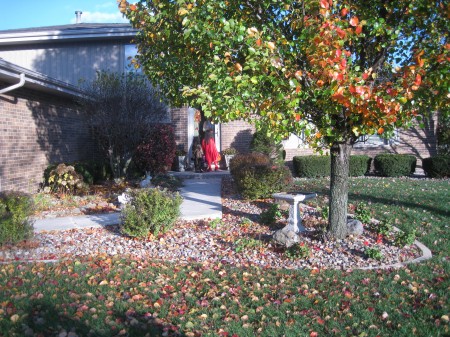 We were walking past some townhouses in our area that we don’t usually go to, ’cause they have sucky candy

But this year, one of them had decorations coming out the wazoo, so we decided to check it out

I was holding Fluffy, so Diamond took the girls up to the door while I waited on the footpath 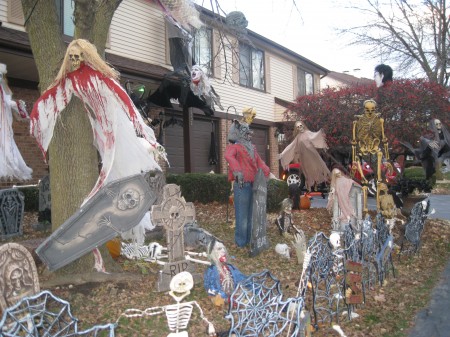 I think he was going for the fat, couch potato, loser look. His costume was awesome

He says to me (in a really think Polish accent)

Are you doing the Hellowin?

Polish Sausage: Do you know how many children die on this day?

Are you fucking kidding me?

How is it, that I’m able to attract fuckwits like this on such a regular basis?

I need to change my perfume, or my undies more often, or something

This shit is getting OLD

Polish Sausage: Why you do this?

Polish Sausage: Why you out here doing this bad American thing, when there are so many children dying?

Me: What the fuck are you on about mate? I’m having a hard time understanding you. See, I’m speaking English. You should try it, being in AMERICA and all

He takes a step towards me, and I’m shitting myself now waiting for Captain America to come back and see him and kick his ignorant arse back to Poland

I needn’t have worried, as he stepped towards me, Fluffy started pulling on his chain and growling

Polish Sausage: American’s are stupid. Stupid customs, while there are children dying

Me: What are they dying of mate? Food poisoning from too much candy? You need to lighten the fuck up

Polish Sausage: No, in Sudan. The children are being slaughtered everyday in Sudan

What a prize fuckwit this guy is turning out to be

Me: Well then, why don’t you go to fucking Sudan and save the children then dude. Obviously you don’t like it here

He takes another step towards me and Fluffy starts going nuts. Barking, growling – I was struggling to hold him back

Me: You need to back off mate, or my dog’s going to eat you. And I’m going to fucking let him

Yeah, he’s a real observant mother fucker this one

‘Cause the Australian accent sounds soooo much like the American one

Oh God how I wanted to let Fluffy go and chew his fucking arm off. Then I could pick it it up and whack the dumb fuck over the head with the soggy end

Right on the guys front lawn

Man, that dog is awesome