It about something that actually happened the day we got back from Australia, over a week ago

I’ve been dying to tell you about it but didn’t want Diamond to think I didn’t give a fuck out of the kindness of my heart, I decided to let some time pass

Before I tell you the most hilarious fucking thing ever!

About the time my husband, Diamond, almost died

It should be said that I’m relieved he didn’t die, for several reasons. The main one being that every time I told people I was a widow, they’d feel so bad for me – until I started to tell them the story of just how my husband met his death – and couldn’t finish the story because I had to leave the room to change my peed in undies from laughing so hard

So back to the story…

It was a looong, hot, steamy summers day in Chicago

Nah, fuck that shit how ’bout I just tell it exactly how it happened without my usual exaggerations and bullshit thrown in

I can’t come to the airport to meet you

Me: why the fuck not? why’s that sweetheart?

Diamond: I’ve had a bit of an accident

Me: Tell me you didn’t smash the car

Diamond: No, it happened when I was cutting the grass

Me: Did the lawnmower take off on it’s own again?

Diamond: No, I was cutting the grass out the back and as I was walking backwards I bumped into a bush

Diamond: And then a pile of bees came out of the bush and started stinging me 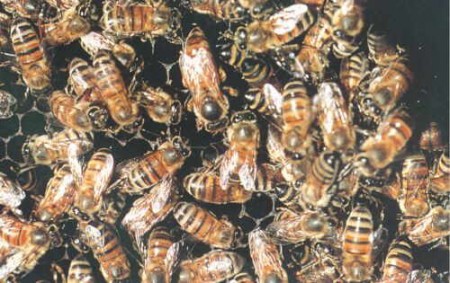 So I’m thinking he’s not coming to the airport because he got stung by a bee or two. What a pussy

Diamond: So there’s all these bees attacking me so I ran into the house to try and get them off me

Diamond: I go tearing through the house and jump down the steps into the living room to try and get to the bathroom 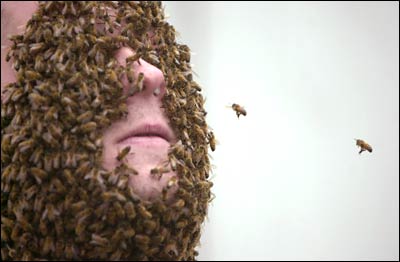 Diamond: But I jumped too high and hit my head on the ceiling and busted it open

Me: You BUSTED THE CEILING???

Diamond: No, I busted my head open

Me: Oh that’s OK then

Diamond: I landed flat on my back and was out cold. I woke up covered in blood and still being stung by all the bees 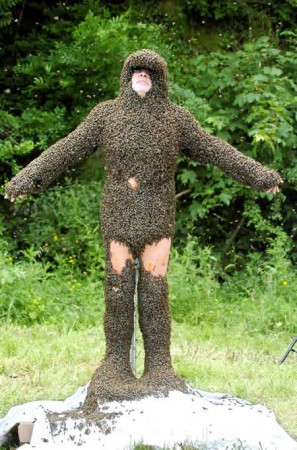 So this is where I start to get the giggles. Call me a bitch, but I’m not the only one. Every single person, without exception, that I’ve told this story to has coughed up a lung oyster from laughing so hard

Me: Well are you alright?

Diamond: I don’t think so

Me: Have you seen a doctor, gone to the hospital?

Diamond: No – I’ll be right

Me: You’re a fucking idiot Are you sure

Diamond: Yeah I’m good – I just don’t think I should drive out to the airport, I’m having a bit of trouble standing up

A few hours later when the girls and I finally got home we found Diamond, pale as a ghost, with a 6 inch gash across the front of his skull

I should report that he is now fine, and even knows that I’m making fun of him writing this

He hasn’t had too many more side effects to report. The dizzy spells and black outs have gone – and his vision’s back to normal

Although is you ask him, these things had nothing to do with being attacked by killer bees and putting his head through the ceiling

Only my Diamond could make this MY fault!!!

** the above photos are NOT of Diamond or HIS bees. Diamond selfishly didn’t think to take any pics for me of his adventures