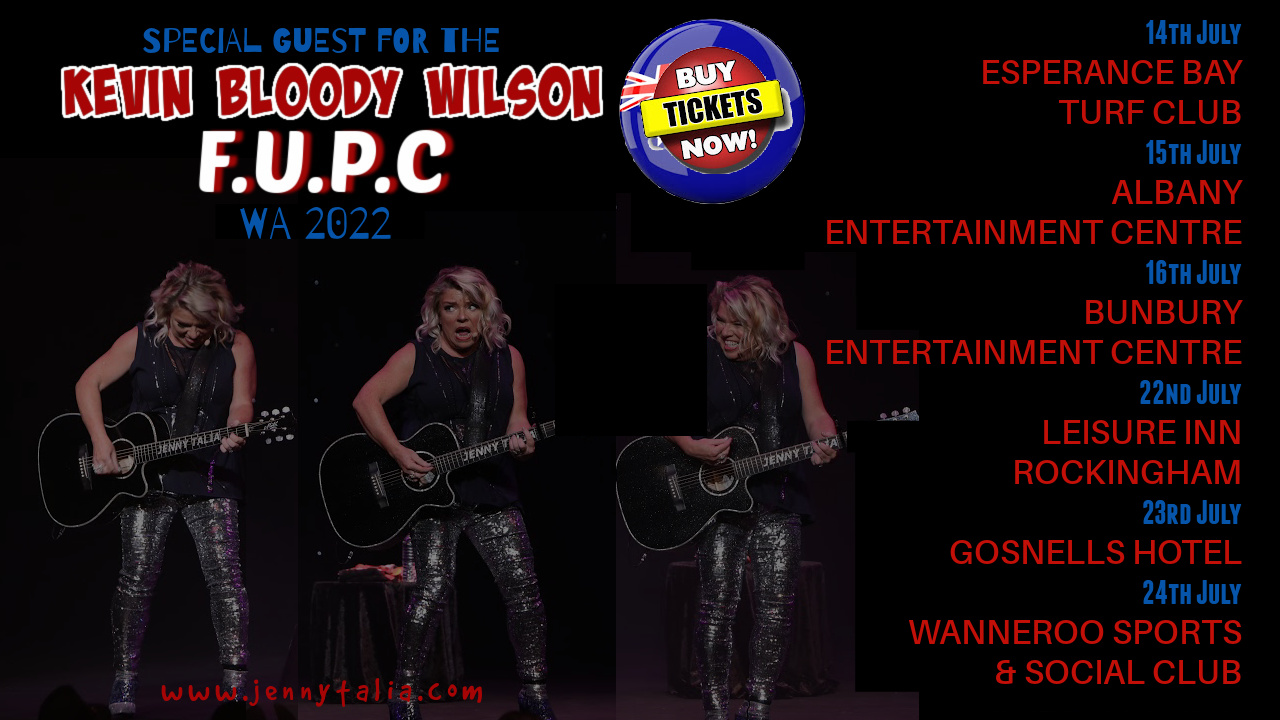 Rachel from Hawaii wrote on August 6, 2009 at 9:00 am:
I love your songs, I nearly piss me pants laughing.. I hope one day, after I'm out of the military I can see you live in concert.. Keep rocking babe!

Clive from London wrote on August 5, 2009 at 8:43 pm:
Hi Jenny. Saw you 2 years ago with dad at Dorking ( you sang Bastard song for the daughter). See you this year at Beck Theatre in September for wifes birthday!!!! and October at Dorking for our annaversary (o'h shit front row) Keep up the good stuff and I hope dad can keep it up aswell!! Clive

Tam Carmichael from North Yorkshire wrote on August 3, 2009 at 9:15 am:
See ya on the 4th October in Blackpool GILLIGAF Tam

Janine from Sydney wrote on August 3, 2009 at 3:29 am:
I was at the Nth Sydney gig and laughed all over again at your blog. I watched that poor paraletic patron get dragged out by Security, and I admit I did it a little smugly, thinking, "Thank Christ that wasn't me FOR A FUCKING CHANGE!" After walking in a Jenny Talia virgin, I'm now a disciple. I first heard your dulcet tones while in the bar queue, and imagined I'd walk out the door and see some wild looking country chick with a head like a gargoyle. Instead I saw a stunner that looked like the young Debbie Harry, with a smile as big as Texas! Never thought I'd find a chick with a fouler mouth than me, and the same unique take on sex, life and everything. You are a credit to Aussie women everywhere, and I will be back for more! Keep telling it like it is! xx

kylie george from Llandilo NSW wrote on July 18, 2009 at 1:52 pm:
hey jenny saw u n ur dad for the first time last night was fucking awesome thought i was gonna piss myself, funny as fuck

julie from warrington, England wrote on July 17, 2009 at 8:50 pm:
I found you on you tube by accident i'm looking forward to seeing you in Liverpool, love your songs JABBA

Damo from NZ wrote on July 8, 2009 at 9:30 am:
Hey Jenny was awsome meeting you n ur dad at da Dilligaf World Tour in Auckland!!! FUCKING LEDGENDS!!!! Hehe i emailed u those pics n u shud so0o0o0o put them up on ur website hehe =P Damo