I’m a fan of the whole Elf On The Shelf
I know some people hate them and others have WAY too much fucking time on their hands when it comes to their elves
We love him at our house, and have since we first got him
This year he got a sister, Stella
Because I am an idiot
Who needs her head read
Anyhoo….last night I posted this 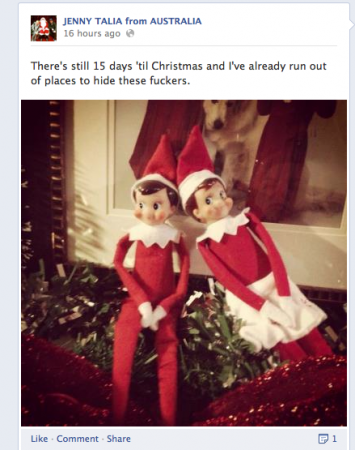 Then came up with the idea of putting one of them in a pot plant (Stella)
And the other (Stampy) on a wall mounted light sconce
Yes, I may have been drinking all afternoon with my neighbours
BUT!
It’s a light we never turn on, so no danger, right?
Until I went downstairs this morning , and forgetting WHERE I’d put them, I TURNED ON THE FUCKING LIGHT THAT WE NEVER TURN ON, so the kids could find the elves more easily. So before you get all, oh-my-god-you-dumb-arse….I was HELPING. Thinking of the CHILDREN

Not 30 seconds had passed
First there was a smell
Then a little bit of swearing
OK, a lot of fucking swearing
Then there was Diamond running to the flames
Then the sound of the girls coming downstairs for breakfast
Then there was Diamond and I giving each other one of those WHAT DO WE DO NOW?!?, looks, that parents do so well
Only this was the turbo version
It was the WHAT IN FUCKING FUCK DO WE DO NOW!?!?!?, look
So Diamond threw Stampy at me….I grabbed him and I bolted for the garage to hide him
The girls didn’t see a thing
Win.
I also learnt that I am swift as all get out, when the possibility of fucking up Christmas entirely is on the line
My next facebook post looked like this

Because Stampy’s butt was charred
And there was NO way my kids, especially Macaroni, would NOT notice or question us or drive us mental with the why, when, what of it all
Rather than make up some story about how Stampy burnt his bum on the jet pack that takes him back to the North Pole every night – and have them not believe me. Because that would be stoopid and obviously made up
(Unlike the elf and his sister that show up magically every morning. That shit’s totally acceptable…derr)
I knew I had to get a new one 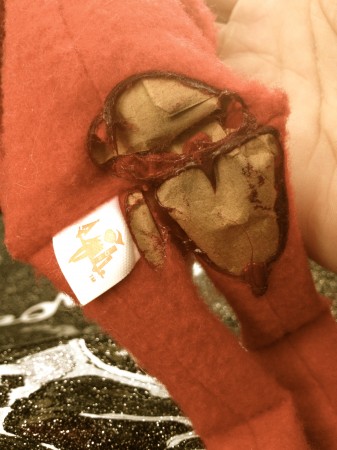 Except Stampy’s 4 years old now
And the new versions of Elf On The Shelf don’t quite look the same
Note to people who make this Elf – WHAT THE FUCK WERE YOU THINKING WHEN YOU CHANGED THE DESIGN OF THIS?!?!? IT’S LIKE YOU WANT US TO FAIL AS PARENTS YOU DIPSHITS!!!
I went to 3 Targets
All they had was girls
And hysterical sales assistants who laughed their arses off when I told them why I needed a boy elf. NOW, no I do NOT want you to order me one, I need it NOW.
After a LONG morning of driving around, I was starting to get panicky.
And the more panicky I got, the more I was like, who the fuck AM I? And how did I turn into an SUV driving Mum that is tearing up because she can’t find the right Elf. And who made up the rule that wine is bad with breakfast?
For fuck’s sake.
At every shop, I got better at mumbling under my breath about how I might have set our elf on fire, followed by a death stare that was effective enough that they at least tried to stifle their giggles while they went and looked for a new one for me.
Yay for Barnes and Noble
Who had BOY elves
And waited until I was walking out of the store to start laughing
Huzzah! 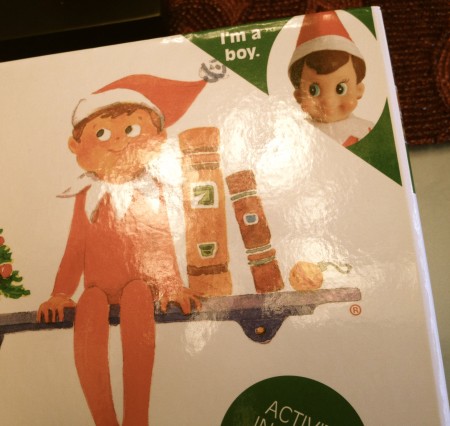 Or not
Because when I opened the box and saw his face, I knew I was screwed
While he looked SIMILAR to Stampy 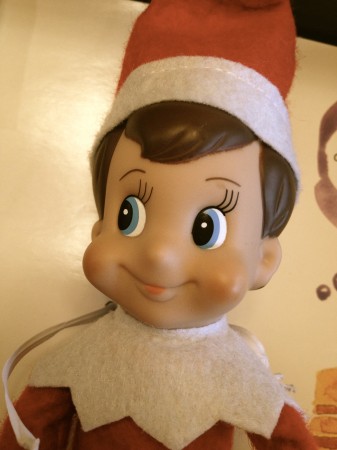 He looked DIFFERENT enough that my kids would totally notice 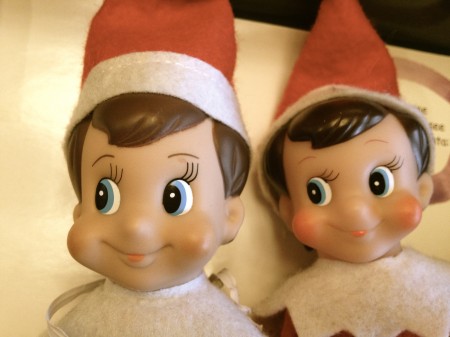 See? The one at the back is Stampy. He’s smaller, has darker hair, and is wearing more blush
Blush Stampy?
Trust me to have a tranny elf with a shrunken head
Dickhead (Stampy, not me)

So you know what had to be done, right?
It was for the greater good
Don’t get all judgey on me. 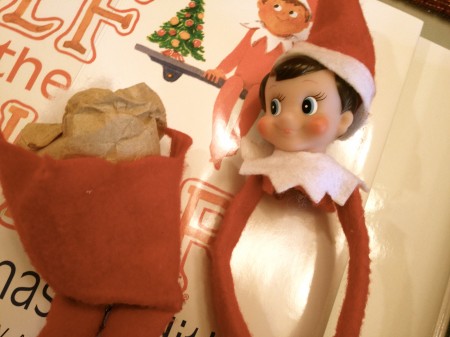 It was time for a head transplant
But….it was also time to pick the kids up from school
So I’ve hidden the body parts in the garage
And officially delegated this job to Diamond
He is the fixer in this family
While I, am obviously the fucker-upper
And yes, I realise that I dodged a bullet
I know this could totally have been worse
Like, burn the fucking house down worse
Diamond’s best friend is a fireman and whenever he comes to our house, the first thing he does is walk around and blow out all the candles I have lit everywhere
So I know he is going to SHIT a brick when he reads this
So yeah, I know as far as parenting safety, being responsible blah blah, I’m kinda failing at being a good example
I get it 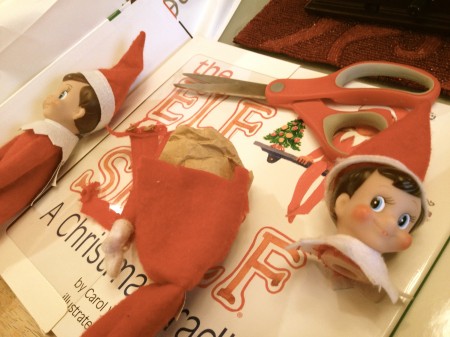 UPDATE: Thanks to  Diamond, no one seems to be any the wiser!
Yes!!
Now, let’s all forget me trying to BBQ the elf, K?
I have.

But I know the the elf won’t forget in a hurry
They say that an ELF never forgets
Or is that a giraffe?