Driving to the show tonight in Manchester turned into quite the adventure|
Which is code for, shitloads of traffic, getting lost, and arriving at the backstage door at 7:58pm
I go on at 8pm…..so yeah, TONNES of time to get ready

I realized on the way there, we were pressed for time
So while Dad drove , I grabbed my makeup and started putting it on in the car
Doesn’t THAT sound like a great idea?
It is.
IF you want your face to end up looking like you had a gang bang with a box of crayons

Anyhoo, arriving with two minutes to spare, gave me enough time to jump out of my trackies and chuck my  stage clothes on

Slip into my FMFM shoes
Throw my guitar and microphone on
And then….GAME ON Manchester

Dude, you guys are officially the shit
I give you a 11 out of 10 tonight
You can’t have good show without a great audience. And you guys were that and more. So much fun!

Well….ask and yee shall receive in Manchester!

I was totally going to give you guys 10 out of 10
But you can thank my new mate BIG GAV, for the extra point.
What a rack!! 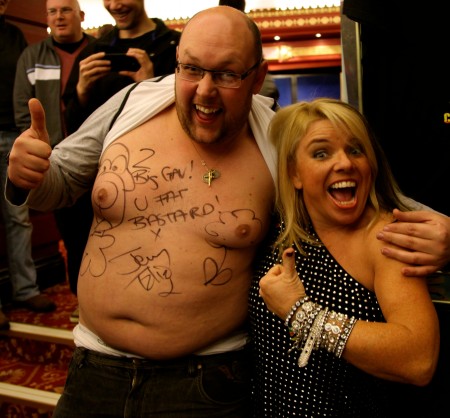