As someone who gets recognised NEVER – if you don’t count the people that come up and ask me if I’m the ‘fat one’ form the Dixie Chicks – it was more than a little bizarre to have complete strangers say, ‘HI JENNY!’ three different times in Chatham today.

First time, by 2 completely lovely Canadian couples in the foyer of our hotel. They were on a 2 week European vacation, that was based ENTIRELY around coming to see Dad play tonight in Chatham. Now THAT’S some miles to travel for a show y’all.
Very cool.

Second time, walking with Mum down to the High Street. Some  dudes yelled out their car window, “…JE-NNYYYYYYYYYY…..fuckin’ legend!” (a cry familiar to any KBW or Nigel fans)

Third time, at the shops with Mum.
Ladies, have you ever had your eyebrows threaded? Me neither. But I’ve heard great things about it, so I figured, you know….if I’m going to try it, why not make it in the middle of a public mall in Chatham on a Friday afternoon where it costs 5 quid. A lady getting her nails done there said, “I know who you are”. I was hoping she thought I was the dumpy Dixie Chick, until she started singing Camel Toe
I just giggled and pulled my jacket up over my head, because oh my fucking God if that ‘threading’ doesn’t hurt like a bastard, and I was sitting there with tears running down my face
And 10 minutes later when it was all done, I opened my eyes to find the same lady standing there with 5 of her friends that she’d called over. Just staring at me.
Yep, just staring. Lucky I’m one of those natural beauties that looks shit hot with no makeup on, blotchy skin with tears streaming down her face. Stunning.
Embarrassed much?
Not really.

But really, the best part of my day – as it usually is on the road, was the show tonight

And not just because the front row all had homemade JENNY TALIA t-shirts on
With quotes from my songs, “F.O.C.U.S, Facebook & Bastard” 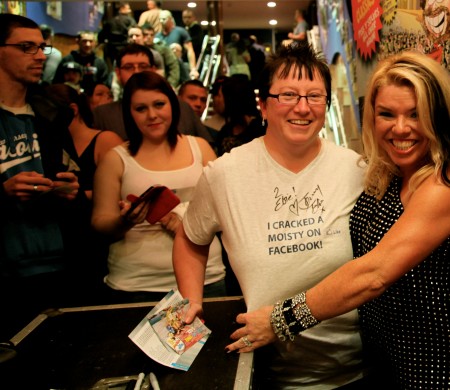 OK, maybe a little bit because of that.
Thank you Chatham!