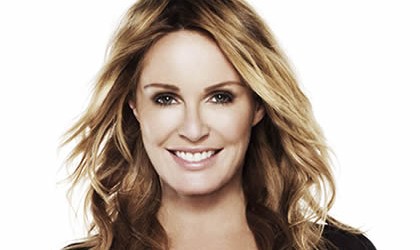 So, I know this is a comedian’s website and should be full of fart jokes and the like, but I’d just like to take a little pause from the funny today and say,

WHAT THE FUCK IS WRONG WITH PEOPLE?

I read this article yesterday about how an Australian media personality, Charlotte Dawson, stuck up for a lady (Casey) on Twitter, who had been taunted by one of her (Charlotte’s) followers. 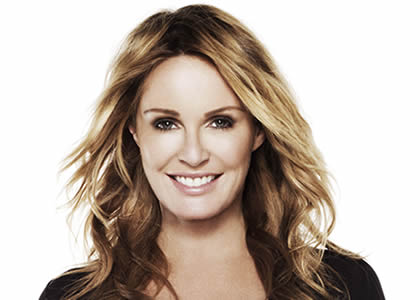 Following?
After Casey tweeted that she had lost her fiancé to suicide, someone else tweeted “…if I was your fiance I’d hang myself too #gohangyourself.”
Wow.
Charlottle managed to track down the author of the offending tweet. Reported her to her boss (she’s a mentor [the fuck?] at Monash University) and her boss subsequently suspended her arse.

The next 24 hours saw a barrage of support for Charlotte, of people applauding her and thanking her for her stand against bullying.
Those hours also saw a frighteningly massive number of attacks on her. 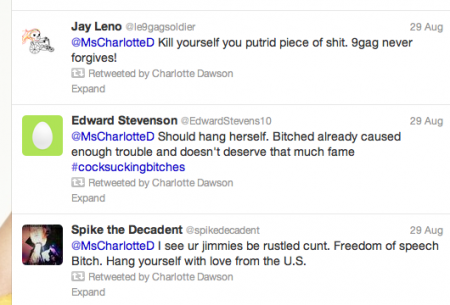 To quote the Daily Telegraph Online

Many Twitter users set up fake accounts just for the purpose of joining the campaign against Ms Dawson.

One user set up an account with the handle ‘@gohangyourself’.

“@MsCharlotteD Like previously stated by the many tweets you’ve received (sic) … And also stated by the country of New Zealand. Go hang yourself.”

Another user set up an account called “@JoKillYourself” and tweeted:

“@MsCharlotteD Kill yourself and save us the trouble of getting you taken off the air, you worthless w***e.”:

The user also posted instructions on how to do it. 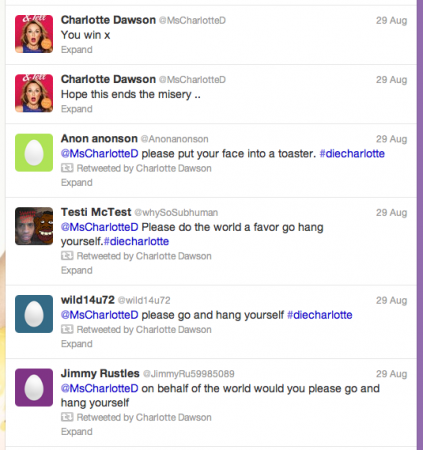 And today it’s been reported that Charlotte was admitted to hospital last night. There are no specifics as to why. But I think it’s fair to assume that the personal and vicious attacks on her are absolutely what put her there.

Look, I get my fair share of ‘fuck you’ mail.
I’d like to be able to say that I can’t remember any of it. But I can. Most of it word for word.
I’ll never understand someone’s need to tear someone else down if they don’t like or agree with them.
I mean, I’m the first to call our Prime Minister a mole. I don’t like her. I think she’s fucking things up royally for Australia and Australians. Would I attack her personally? No I would not. My beef is with her and her policies.
Would I write a song about her? Absolutely. Is it vicious and hateful? My intent is to always find the funny. Some people may not find it funny. But they’ll never find it hateful.

It’s like other stuff I don’t like, smug newsreaders that piss me off with their wanky-ness or singers that have that really nasally tone that makes my ears pop in the ‘not good’ way, or Republican women’s HAIR ohgoddontgetmestarted.
There’s a metric tonne of shit that frustrates the fuck out of me for some reason or other. Sometimes for no good reason at all.
But here’s the thing, I’m free to just NOT LIKE IT.
Walk away, not buy what they’re selling, log of their website, whatever.
I don’t have to hate them. I don’t have to threaten them online.
And I certainly don’t have to tell them to hang themselves and attach instructions on how to get the job done.

The anonymity of the internet is a double edged sword. It allows people to browse around, leave comments on different blogs and websites and generally just find their ‘happy’ online.
The downside, is that same anonymity of the internet brings out the trolls. The faceless tough guys that leave hurtful and horrible messages all over the place.
Why?
Well I have a theory along the lines of them needing to get laid and out of their grandma’s spare room, and the internet provides them with a place where they feel important, funny, or noticed.
They really don’t care what they do or say to obtain those things.
In the real world, these people are more than a little fucked in the head.
Why so hateful?
Why the need to type out your venom to someone you’ve (more than likely) never met?
My bet is you could NEVER say those things to someone’s face.
Because cowards are like that.
Is it any wonder that kids are growing up online and are acting out these same behaviors.
Bullying is not OK.
And no one should ever have to go through the pain of losing someone to suicide.

So, to all you little snivelling pussies who use their keyboard as their battle shield, (who wouldn’t be reading this, because the peeps that read this blog, for the most part, are fucking awesome – so feel free to share this page with any bullying fucktards you may know and love) guess what fuckers?
Whether you like it or not, there’s more of US than you.
People who have lives, and don’t need the live on the internet to feel like we’re somebody.
People who will call you out for being the sad humans that you are.

You may not be accountable yet. But you will be.
I hope this whole Charlotte Dawson saga is the catalyst for some change
New laws, tougher laws. Some kind of price to pay for being an arsehole
We could call it a FUCKTARD FEE, a TOSSER TAX. Of just the PRICE of being a PRICK.

My Mum always said, “…being nice doesn’t cost a thing”
And Dad said, “…sticks and stones won’t break my bones,
but fuck you, you fucking fuck.”

So I say, “…being nice doesn’t cost a thing
you fucking fuck.”

UPDATE: more than a few people who’ve read this have pointed out my comment, “…I’m the first to call our Prime Minister a mole” – and that it does, in itself, count as a personal attack
Mole is a word I use a lot. My friends and I will call each other ‘a silly mole, and old mole, drunk mole, grumpy mole’. I guess if certain words have (as Dad says) ‘value points’, I would give the word ‘mole’ maybe a 2 out of 10. Other people may rate it higher, if it’s more offensive to them.
Would I call her a silly mole to her face? She is, after all, the Prime Minister. She is not however, my friend.  So probably not.  Was it a personal attack?
No.
Should I have worded it differently?
Probably.