The new DVD, WHO DARES GRINS was actually filmed in South Africa 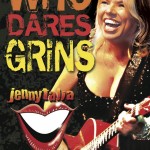 But we wanted to include the new single WAIT, on it too – especially as it continues to do so well

WHO DARES GRINS will be released this CHRISTMAS…..which is like, really fucking SOON….HUZZZAAAAH!!!