OK, so experiencing any food, anywhere is completely fine with me

Especially food I didn’t have to cook

You hear that South Africa?

While I love your people, culture and amazeballs wild life parks

I refuse to chew on a chimps scrotum 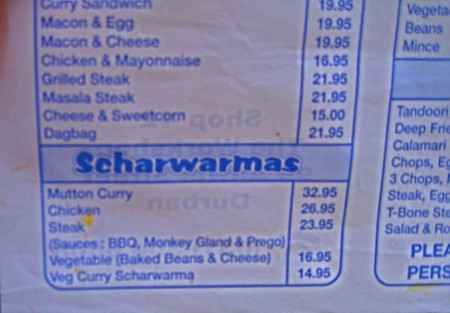 What about that sounds enticing to you?

‘Cause to me, it paints a picture of some whackjob in a chef’s hat – a hundred screaming primates – and a pair of hedge trimmers

It’s just what the food was called

And calling it POO CAKE

Why would you do that?

You should try and ‘woo’ the tourists with your local cuisine

Disguise the grody shit you’re trying to serve up

Why not just call it, Mendella Meat Ball Soup?

I would totally try that

Cause I’m into soup and politics 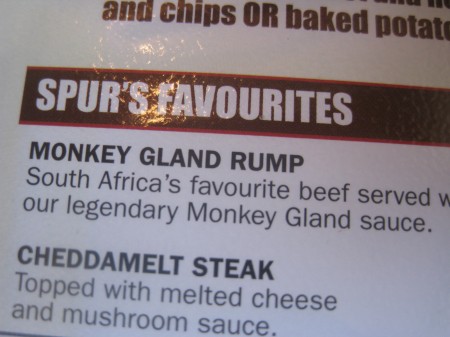 Yeah, you really need to work on your menu descriptions

Some of us (ie; me) foreigners are a bit squeamish about the weird stuff

‘Cause really, the idea of monkey gland soup makes me gag like a teenager giving her first blow job

I have a hot date tonight, with my husband Diamond, at a cool new restaurant by our house

Apparently they have fresh Rocky Mountain Oysters on the menu

Which is another yummy sounding dish I’ve never tried

I told him to shut the fuck up