Ok, so last Sunday I put a post on Facebook saying, “Happy Father’s Day to all the Dad’s in the US “
And being the genius I’m obviously not, I deleted it
Why?
Because it’s today
I was a week early
Go me!
I went shopping with the girls before I left
So they have all their gifts for Diamond sorted out
Cute little homemade cards to go with it too , which he’s going to love
We took extra care to hide the presents really well
We needed them to be somewhere he wouldn’t find them
Because yes, he would totally go looking for them
And they also had to be hidden somewhere that the girls would remember, and be able to get to
So the top of my closet wasn’t going to work
We decided that under Miss 4’s bed was the best bet
They would remember that spot, and be able to access it easily
Plus under Miss 6’s bed is full of biology books she bought at a garage sale?!?
Apprently the access was too easy
Cause on Skype this morning, the ever efficient and always on top of things, Miss 6, was near meltdown
Mummy, Daddy’s presents are gone!
Are you sure?
Yes. The only thing under the bed is dust & Fluffy’s dog bowl”
(I’m not even going to speculate why the dog’s bowl is under the bed – because the dog is too big to go up the stairs, let alone in the bedrooms and UNDER the bed)
Can you go get Daddy for me?
OK
I’m thinking Diamond has been a shit decided that he could’t wait for his World’s Best Daddy trophy 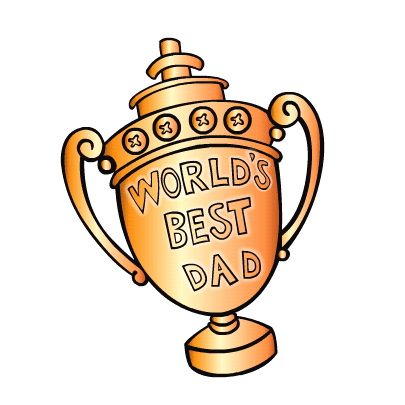 So I asked him, did you get your presents out from under the bed?
What presents?
Dude, your Father’s Day ones. We hid them, and now they’re gone
I didn’t take them
Truth?
Truth. But only ’cause I couldn’t find them
(Told you he’d look!)
Well they’re gone. And you know what that means?
Shit, yes I do
Yep, the little thief strikes again
The little thief being Miss 4
Remember the telephone incident?? and what fun that wasn’t
Yeah, well she’s shown no signs of curbing her enthusiasm for ‘borrowing’ shit that’s not hers
Now she’s moved onto prewrapped tacky gifts for grown men
She comes over to the computer
I look her straight in eye and asked her if she took them
And she puts her face right up to the screen, and says, took what Mummy?
But then she smirks
Just a little one, but it’s enough to prove to me that she did take it
She is incapable of taking anything seriously
Ever
It’s actually a pretty cool quality in a kid
I’m counting on chilbirth to burst that, ‘everything is a joke-ha-ha’ bubble for her one day
For now, it makes her pretty much always happy & joking around
She also happens to be an exceptional liar
I’m talking really fucking good
Well, I have no idea where they might be, I said
The tree house?
The toilet?
The bottom of the pool?
Forever the optimist, Diamond says, it’s OK they’ll show up somewhere
It won’t matter to him if he gets his gifts or not
He’s spending his Daddy’s Day with his girls
They’re going swimming
Then on a picnic
.
And now with a treasure hunt thrown in for good measure
.
Happy Father’s Day dudes!!